Martin Wijesinghe, for many Sri Lankans would only be another name…………but to those with a knack for the wilds, the environment, and the Sinharaja Forest…. the only one of its kind in Sri Lanka: Martin is a dear friend and a loving companion. 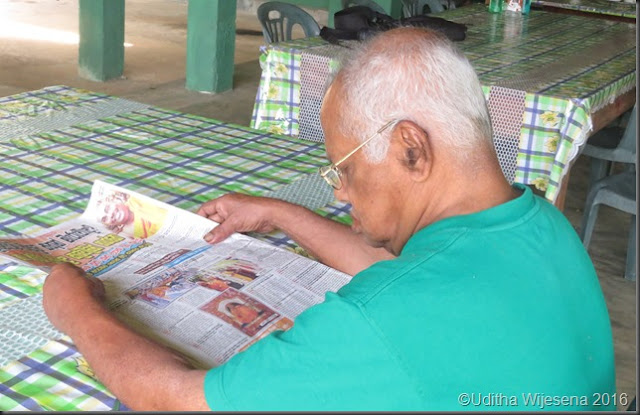 Martin for that matter is now an authority on Sinharaja……..

It all began in a very humble way. As he narrates he was born in 1940 in the village of Pethiya-Kanda located within the outskirts of Sinharaja. Things didn't go right for him at school and was out at the age of 15 completing the 8th standard. This was considered a sufficient standard of literacy then and was good enough to pursue a carrier of skills. Having tried his hand at carpentry, masonry and various occupations in the rubber estates and not happy with either he gets into marriage at the age of 19 from the village Kudawa in Weddagala and starts life together. It was then that occupation came to his door step when the project for selective logging of Sinharaja was to commence to feed the massive plywood factory that came up in Salawa, Kosgama.

By 1970 Selective Logging commenced and the destruction to the untapped Sinharaja was immense. Selective logging creates the immediate of a felled tree to total destruction and is devoid of a forest canopy and the ground is exposed to the elements. This open area needed to be planted with saplings that would catch the sunlight through the forest canopy and grow fast to bring back the forest cover. The Forest Department initiated a programme to plant these expanses with indigenous saplings and Martin found occupation in this programme as a charge hand; supervising the re-forestation programme.

The selective logging brought about a significant damage to the forest and this raised a public outcry with protest. By 1972 the Wildlife and Nature Protection Society headed by its then President Thilo Hoffmann came out in support of the protests and he initiated a fact finding mission on the magnitude of the destruction and a publication which followed highlighting the scale of the destruction and the impact to the fauna and flora within the forest. As a result of these findings the then government was compelled set up a Ministerial committee to report on these findings and the result came in by 1977 when it was decided to halt all types of logging within Sinharaja. The Ministerial committee highlighted the need for scientific study on the forest; and by 1978 Sinharaja was elevated to the status of an International Man and Biosphere Reserve and is now a part of a word–wide chain of protected areas.

The detailed research was entrusted to the University of Peradeniya. However it was the organization March for Conservation [MFC] a group that was formed to rescue Sinharaja that first established a center for research in a make-shift log cabin alongside the current research center.

Sinharaja was now frequented by senior academics from Peradeniya assisted by young academics from the Colombo University and other interested groups and organizations.

Martin was now idle again with his team of tree planters having had to abandon their occupation which would have had to continue only with the deforestation.

The make shift research facility was in dire need of a person to care and run in the absence of the research teams. Being a person from Kudawa Weddagala and now living just outside the Sinharaja forest in a wattle and daub abode; opportunity opened for Martin once again;....... who now became the ubiquitous requisite and the all-purpose man.

He was absorbed in the carder of the Forest Department and was enlisted as the caretaker of the research facility. It was here that he says he was exposed to science…. having left school in grade eight, it was more like going to school again for him working with the researchers.

Professor Balasubramaniyam from the University of Peradeniya taught him botany while the eminent Museum Curator Mr. P.B. Karunarathne taught him zoology, says Martin. There was then the young academics who assisted the seniors………the likes of Dr Sarath W Kotagama, Dr. Nimal and Savithri Gunathilake, Ms Neela de Zoysa and Ryhana Raheem [an English scholar but a leading activist of MFC ], Mr. M D Dissanayake, and Siril Wijesundara and Mr. Mark S Ashton to name a few who was more closer to Martin, who in return continued and helped them with the research work in their absence in the field.
Martin was now the meteorologist keeping rainfall records and gauge readings on the swell of the river. He was also the one who checked the traps set for the small mammals at the proper intervals and caging them for the researchers; recording the times of capture etc. This way he became a person who saw the depth of the forest and became a change factor to the community in the sustainable use of the forest for their dwelling and existence.
Time goes by and Sinharaja is now in the world map as a biodiversity hot-spot in Asia / Sri Lanka. The high endemism in the Flora and Fauna in Sinharaja was exposed to the world. International authorities on Natural Science and other interested environmentalist and naturalists show up in Sinharaja and the visits become numerous. Birders, Zoologists, Botanists come over to see the fascination that the scientific publications signified. These visitors needed interpretation and guiding in the forest and moreover they needed a place to stay overnight close to the forest. It was again the ubiquitous Martin who came to their assistance.

Martin now had to expand his abode to house his visitors. In the meantime the research grants extended funds for awareness in education to the forest users and students both university and school. This again needed accommodation. Now a makeshift dormitory with a study area was created by Martin in his premises and educational activity commenced. Not a single sapling was harvested from the forest but all the timber was brought from outside and a facility with basic needs came up. Water requirements was from the stream flowing by and provisions and paraffin brought by the programme participants were cooked and used for illumination by Martin assisted by his beloved wife.

These educational programmes were organized by the Field Ornithology Group of Sri Lanka [FOGSL] of the University of Colombo spear headed by Dr Sarath W Kotagama. March for Conservation [MFC] had by now ceased its activities with much of their research completed.

By now the Forest Department finding the great potential in the local visitor to Sinharaja also puts up dormitories and regularizes guide assisted day tours in the forest and commences educational programmes.

However Martin was the most sought after person to the overseas visitor. His small library with bird guides and tree guides enhanced the interest of the visitor and Martin was by now world renowned.

Eco-tourism caught up with Sinharaja in the 90‘s and the annual birdwatching tours always came up to Sinharaja and now “Martin’s Lodge” was the overnight stay or the lunch stop in the forest. Martins Lodge was now in the World Wide Web and became an economic entity in the Eco-tourism industry in Sri Lanka.

In 1994 Martin Wijesinghe is honoured with the title Sri Lankathilaka for his service for assisting in the scientific research in Sinharaja by President D B Wijethunge. This is regarded as a national recognition a lay Sri Lankan could achieve in a lifetime.

Today Martin is retired from the Department of Forest Conservation and is running his “Lodge” to the local and international visitor. He is assisted by the whole family and one need not carry his provisions up there as before. The Lodge provides you with a full board facility but with basic needs.

Going by the trip reviews “Martin’s Lodge” is commented as not the place with the best bed and towel in Sinharaja….but for the ardent birdwatcher it is the best location to be in the forest at the crack of dawn.

However the Lodge and the facilities need to be looked at in a different perspective. It is housed with basic necessities. The beds are of recycled timber. The mattress is of average foam rubber. The water in the faucets is tapped in the running stream and its pressure derived from the run in the river. Hot water is from solar energy. It’s not for luxury that you pay in this forest facility but for the logistics.

If one is to look at the facility in a different mindset it could be interpreted as the way of Buddhist monastic dwelling. The furniture in the room is also limited to a simple open cupboard with a screen type furniture where the monk laid his robe. If one thinks of his stay here in line with a monastic recluse ………I’m sure his stay at Martin’s Lodge will definitely be a novel and a memorable one.

Unfortunately there is no interpretation of this simplistic lifestyle that one pays for at the “Martin’s Lodge” highlighted in any of the tour guides or reviews.

Martin today is 76 years old and wears three stents just short of a bypass surgery. A feeble but active personality……….how would things be at the Lodge without Martin is a question that the organizations making use of the facility today will have to workout..... in-order to sustain this facility for the future generations that would come here to see Sinharaja………
Posted by UDITHA WIJESENA at 1:56 AM